The Cost of IT Downtime

Infrastructure matters. When your network or applications unexpectedly fail or crash, IT downtime can have a direct impact on your bottom line and ongoing business operations. In some extreme cases, data and monetary losses from unplanned outages can even cause a company to go out of business!

The industry average cost of IT downtime is dependent on a lot of areas. The monetary losses vary when you consider your revenue, industry, the actual duration of the outage, the number of people impacted, the time of day, etc. For example, losses are significantly higher per hour for businesses who are based on high-level data transactions, like banks and online retail sales. If you experience an unplanned outage during peak traffic time, obviously the damage will be more significant.

Indirect Costs of IT Downtime

But there are other costs that don’t often show up in dollar form. That’s the cost of interruptions, especially when IT professionals are interrupted from what might be more productive work.

Take, for example, the interruption that occurs when someone pops into your office to tell you that your email server is down. That interruption, of course, takes the time it takes, plus the time to fix the problem. But did you know, according to a study by UC Irvine, that it often takes an average of 23 minutes to refocus and get your head back in the game after an interruption?

As once reported in the Washington Post, interruptions consume, on average, 238 minutes per day. In addition, the time to get started back up after an interruption consumes another 84 minutes a day. The time lost to stress and fatigue steals another 50 minutes a day.

All that adds up to about 6.2 hours per day, or 31 hours per week lost to interruptions! Is it any wonder we’re spending most of our time treading water?

The truth is that no business is immune to the corrosive effects of downtime when it comes to customer — as well as employee — retention, productivity, and standing in the marketplace. Downtime is extremely expensive, and in ways that can make or break the success of your organization. At the same time, it’s essentially unavoidable, because technology architectures are becoming increasingly complex and unpredictable.

Downtime is costly enough when it results from purely accidental failures in your technology. But when downtime is the result of nefarious behavior by hackers and other threat actors, the monetary consequences can start to skyrocket at an alarming, often business-ruining rate.

The statistics on this are sobering: A 2017 study found that SMBs spend, on average, approximately $117k dollars to recover from a cyberattack. And the SMBs that do recover are the lucky ones, as nearly two thirds of SMBs have to close up shop within six months of a hack or data breach, as reported by the National Cyber Security Alliance. And it’s not just the big companies who suffer from cybercrime, either. Verizon’s 2019 Investigations Report revealed that 60% of cyberattacks affected SMBs.

And now with more and more employees working from home, companies face an even tougher battle against cybercrime. Remote work has “contributed dramatically to the rise in successful ransomware attacks,” says Israel Barak, chief information security officer at Cybereason.

Downtime caused by threat actors comes with the usual costs of downtime — the costs of not being able to do business — plus a plethora of additional costs, such as the ransom payments that companies make to hackers after a ransomware attack. But perhaps the most insidious cost of a data breach is reputational damage. A survey put out by Security.org found that almost one in four Americans stop doing business with a company after it suffers a data breach.

Preparing for IT Downtime

So, what can you do? Are there any positives in all of this?

The best news — and what really matters — is that simply taking a few steps to prepare for an outage can make a huge difference. You can, for instance, take the time to define which services require the most prioritized response, have contingency plans in place, leverage post-mortems to improve processes, and conduct regular testing.

By taking the time to implement a plan for addressing inevitable downtime, your organization stands to realize thousands — or even millions — of dollars in quantifiable cost savings, as well as ensure the health of crucial qualitative factors such as employee morale, brand reputation, and customer loyalty. 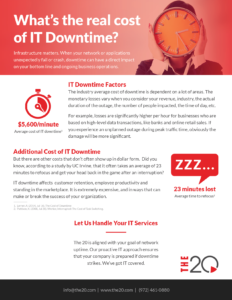